We were supposed to have an early start this morning so we could make good time as we head north for the border – guess who blew it! Yup yours truly set the alarm wrong. A timely call from Clare who couldn’t quite hold back the giggling got me out of bed and off to breakfast in a hurry.

Johan bundled me and my stuff into the bus and off we went. Once again the drive was an instruction as Johan filled in all the gaps in the landscape with stories and titbits of local history. I don’t know how many times I have said this, but the only way to get a real handle on South Africa as a country is to spend time driving around. If nothing else you get to appreciate its size and how varied its landscapes really are. For me this was one more ambition ticked off the bucket list. Long ago I’d driven south west from Joburg to Capetown on the N1 highway and always planned to do the opposite run, northeast from Joburg to the border. Yesterday we’d come up to Mokopane from Joburg on the N1, and now we were on the same road heading for Musina and Mapungubwe. Tick, and job done. 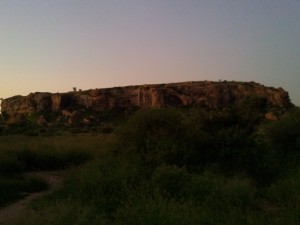 Once through the highlands on whose southern slopes Mokopane/Makapan is located, we are on another flat plain until we hit Louis Trichartd and the last mountains before the basin of the Limpopo. The mopane tree blankets the landscape here, though as we approached the area of Mapungubwe the view through the windows was dominated by long parallel ridges of rock formations which I guess are volcanic dykes. We arrive about mid-morning, and it is another treat for me. My first ever South African rock art experience.

Our guides are Armand and Brigitta from the Mopane Bush Lodge and we take a short walk through the bush to Koaxa’s shelter. Wow!! No amount of brilliant photography or clever word-smithing can ever do these places justice. It is some of the most vivid and emotive archaeology I have ever experienced. Might be heresy for some, but I found it more moving that the cave art in Europe that I have seen. Somehow the connection to the painters seems more real here, perhaps because of the open air location. To view the art you have to lie on the same rock the artists used to paint their images. It connects you straight away. Many of these paintings may have been shamanistic, so the rock face would have been a porous membrane between our world and another. It is somehow easier to imagine the artists lying on their backs and transcribing their experiences and beliefs on to the rock face. There is something more shadowy, almost murky about European cave art. 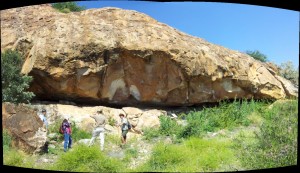 Panaoramic view of Kaoxa’s shelter with, from left to right, Johan, Clare, Brigitta and Armand.

All too soon we have to leave this beautiful spot. I scored a personal triumph here – a beautiful discoidal core on a rock surface on the way to the shelter. Like an idiot I forgot to photograph it.

After lunch it was off to the Mapungubwe interpretation centre. It is an impressive modern architectural interpretation of the traditional beehive hut-structure and contains a replica (I assume) of the famous golden rhino discovered at the site. Since we had a bit of time on our hands we took a quick drive to a local viewing point. Here the Shashe river meets the Limpopo – the border of Botswana, Zimbabwe and South Africa, but not a fence or border control in sight. It is part of the great trans-border park situated here, to allow animals to range freely and migrate across their traditional territories. The view is amazing – real Africa.

Toward the end of the day Clare, Johan and I join a cheerful tourist group on one of the only three visits allowed to the Mapungubwe site a day. Mapungubwe is one of the glories of southern African archaeology and a jewel in the crown of world civilization. It is not as well-known as Great Zimbabwe, yet it represents the emergence of a large complex state in the South African middle Iron Age (from say 900 to about 1350 AD). Mapungubwe itself did not really come into its own until well within this period (c. 1250 AD) when chiefs moved their residences onto the hill top and commoners were confined to the area below and surrounding the hill. Some archaeologists believe this is the emergence of a social organisation based on class-distinctions, the roots of what later emerges in Great Zimbabwe.

The location seems to be a huge bowl set into the side of the valley as it sweeps down to the Shashe-Limpopo. Within the basin are plateaux, one of which is the Mapungubwe hill itself, another is K2 the focus of an earlier phase of extensive social influence in the region. Other plateaux were occupied at the same time as Mapungubwe hill and were either sacred sites or were for cattle, one of the sources of wealth and power in this society. At sunset it’s a very atmospheric place. The sun goes down over Botswana, and then there is that soft half-light of the African dusk when the bush starts to wake up. Our guide armed with a rifle, takes us back to the vehicle. He has a special link with this place, it was his grandfather and great grandfather who first showed the Europeans where the site was – though his great grandfather refused to actually accompany the party in case they disturbed the spirits that still live there – sensible man.

It is easy to see why this is still a special place, and so richly deserving of its World Heritage status. The spirits may well have been appeased a little when, more than ten years ago now, human remains from archaeological investigations were ceremonially reburied on the site in the presence of sangomas who are the traditional healers and diviners of southern Africa.

As ever, wishing you were all here.