Saturday 2nd May. I’m here in South Africa helping Andante Travels, who specialise in heritage and historical tourism, design a tour that would reflect some of the key aspects of South Africa’s rich archaeological heritage. It goes without saying that no tour could ever hope to fully reflect the sheer scale and diversity of this beautiful country and its history. So our job is to pick a few key moments from it. Knowing me you can bet that human origins is going to be a big part of it – hardly surprising in a country that has made such a huge contribution to understanding our origins.

Andante’s Clare Tuffin and I arrived in Johannesburg just after breakfast. We met our South African guide for the week, Johan van der Biljon, and straight away headed for the Apartheid Museum in Joburg’s Ormonde suburb. It’s a museum I have visited before, but no matter how many times you go it is impossible not to be affected by its grim message, and if you want to understand something of South Africa’s current situation, you have to look into its recent history to start with. Apartheid had been about drawing lines between people, and making judgements about them depending on which side of the line they were. I think South Africa will always have racial difference at the heart of much of its social and national thinking, only now it is about showing that those lines don’t mean anything; where better to show the basic unity of the human race than in a country whose national identity has emerged from the fires of intolerance and wilful misunderstanding. This touches on one of the most important contributions that human origins can make to our world – reinforcing the fact that the visible differences between all humans are very recent, so the lines that divide us are too shallow to mean much.

That’s what I like most about the Apartheid Museum, it is not only an introduction to modern South Africa, it is an introduction to modern humanity. You walk through its exhibits, count the hangman’s nooses symbolising lives brutally taken, and you can’t help but think about who we are, why we do what we do, and what our responsibilities are to each other. These are questions that the study of human origins is uniquely placed to contribute to.

After the museum it was time to check into our hotel and a good night’s sleep. 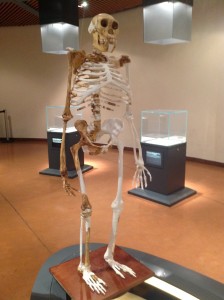 ‘A reconstruction of the fabulous A. sediba at the Maropeng visitor’s centre.’

Sunday. An early start and a visit to Maropeng. This impressive museum/visitor centre was built long after my time in SA, and was a part of the Cradle of Humankind’s successful bid for World Heritage status. I had heard mixed reviews from various people about the centre, but I found it a very positive experience, even the boat ride through the ice age was fun. Our guide was Lindwe and she hit an excellent balance between enthusiasm and knowledge. SA’s contributions to palaeoanthropology are there for all to see, the Taung child, a bevy of Australopiths and Paranthropines, great reconstructions of the skeleton of Australopithecus sediba, and an equally impressive cast of the Littlefoot skeleton which Professor Ron Clarke is calling Australopithecus prometheus. These last are just the most recent of SA’s contributions. The full hominin story is presented along with skulls and lifelike reconstructions. We can hum and hah about whether these map onto our own preconceptions of what hominins actually looked like, but at the end of the day the exhibits are there to bring the story of human evolution alive to the general public, and that is not an easy task. What impressed me more than anything about Maropeng’s rendering of the human story was how it was set within the bigger picture of science, and biological and planetary evolution.

‘The Maropeng visitor’s centre. Maropeng means ‘returning to the place of origins’ in the Setswana language.’

The afternoon was a blast from the past for me.

I’d first visited Sterkfontein maybe fifteen years ago, on a memorable day when Professor Kathy Kuman gave us a tour. I recall vividly the thrill of that first visit. Walking on the metal catwalks, looking down into the deep excavations, I was experiencing one of the most famous sites in hominin research, one that I’d been reading about since undergraduate days (now feeling more and more like the Pliocene!). That same sense of privilege was with me as Dr Dominic Stratford explained the many changes in interpretation and especially in the dating since that time. Then it was over the valley to look at Swartkrans, another renowned palaeoanthropological site with Paranthropus and suggestions of the earliest traces of fire. It is only when you try and get your head round the stratigraphy at these sites that you start to realise just how complicated cave excavation and interpretation really is. Finally, we were permitted a brief look at Kromdraai, which was particularly exciting for me as I had never visited this site before. This is another famous Paranthropus locality, currently being excavated by South African and French collaborators. I was genuinely surprised at how small the original Kromdraai A excavations were. The new excavations are much bigger and I can’t wait to hear what they discover.

So it was back to the hotel, dinner, and a much needed beer. Visiting legendary sites is a thirsty business. But Clare, Johan and I had one treat left. Stargazing with a local astronomer called Vincent Nettman. I never really got astronomy before, but through his telescope – sorry, reflector – I could clearly see the cloud rings of Jupiter, its moons, and even the rings of Saturn. Absolutely amazing!

Tomorrow is another busy day as we travel up north to Makapansgat, so I’ll sign off now. As always, wishing you were all here.