A few months ago CAHO was invited to form a collaboration through Dr James Cole of the University of Brighton (James is a CAHO alumni) and Dr Pastory Bushozi of the University of Dar-es-Salaam. The project is to re-examine the famous Acheulean site of Isimila in Tanzania. 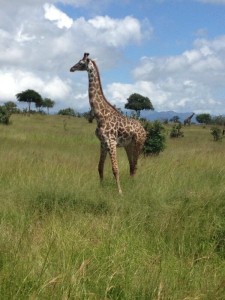 So James and I flew out on the 23rd of April to meet Pastory and to plan our campaign at Isimila. I am interested in the Acheulean and the technology behind the manufacture of the large cutting tools (LCTs) at the site, James is interested in the Acheulean and the transition to the Middle Stone Age (MSA) and Pastory is interested in the MSA itself, having worked on the MSA in other parts of Tanzania. Isimila is a fascinating site. It was dug in the late 1950s by F. Clark Howell, Maxine Kleindienst, and Glen Cole amongst others, and excavations have been done by a number of other people subsequently. Based on typological associations, and early radiocarbon determinations it was initially thought to be a Late Pleistocene/late Acheulean assemblage. Later, a single Uranium Series date was produced which pushed the age of the site back to Middle Pleistocene.

It’s a site that is often talked about and referenced, but very little is actually known about it as it was never properly published. It is also a site that has been involved in important developments in the methods and techniques (particularly typological) applied to the study of East African Acheulean assemblages. Dating will form a key part of our collaborative venture.

Today (Friday 25th) was our first full day in Tanzania, and it was a really exciting one. We drove up from Dar es Salaam on the coast to Iringa in the central Tanzanian highlands which is 1,500+ metres above sea level. The journey was a magnificent cross section through the physical geography and environmental differences that mark the transition from the coastal plain to the central plateau. To begin with we were in the most terrifying traffic jam I have ever been in as we tried to get out of Dar, but our driver Habib was very skilful at ducking and diving through the traffic. Eventually we were on our way. We headed eastwards rising in altitude slowly until we crossed the Mikumi National Park. Here the landscape has not really been affected by farming. We saw giraffe and wildebeest, and James saw an elephant which I missed. From my South Africa days I would have said the landscape was an open bush and tree veld, with more open areas of savannah in the distance. It set me to thinking about Acheulean hunters occupying a variety of African landscapes, and just how mosaic that landscape really can be within quite a small area. I well recall Kruger National Park in South Africa really bringing that home to me.

After Mikumi we began the real climb into the foothills of the Tanzanian highlands, driving up the switch back road that winds its way up the escarpment. The views back onto Mikumi were superb. At the top there is a completely different landscape. Granitic (I think) kopje’s and low ranges of hills dominate a more open landscape all boulder strewn. We are staying in a place that overlooks the lower part of Iringa town and you really get a sense of the how different the landscape is up here. It is also a good point for a cool beer after the long ten hour drive; we all agreed that Habib especially had earned his.

Tomorrow it is off to see the site, so we are all really excited. I’ll let you know how that goes…

Wish you were all here,
Mac